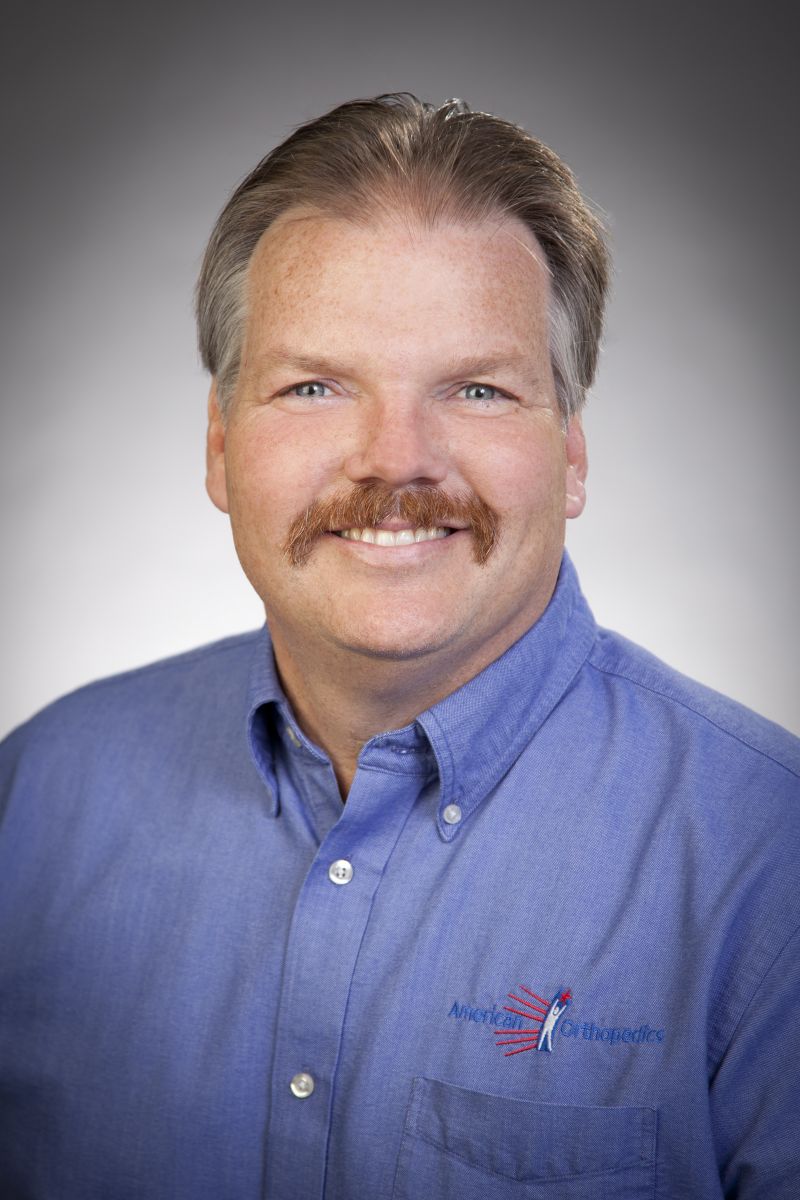 Rick Nitsch is an Ohio Licensed, American Board Certified prosthetist and orthotist, specializing in lower extremity prosthetics with special interest in above-knee amputation/prostheses.

After receiving an Associates Degree at Franklin University and practicing for 18 years, Rick joined the professional staff at American Orthopedics in Columbus, Ohio in 2001. His Certificate in Prosthetics was earned at Century College.

Rick is a frequent lecturer to various healthcare professionals, including Orthopedic Foot and Ankle Society, Physical Medicine & Rehabilitation resident physicians and Physical Therapists at all major hospitals in Columbus. He has been an examiner for the American Board of Certification in Prosthetics for more than 15 years. In addition, he is the residency director at American Orthopedics. His 35 years of service to the Columbus amputee community have enriched many people’s lives as well as his own.

When not at work, Rick enjoys spending time with his wife. His interests include beekeeping, golf, and all outdoor activities. 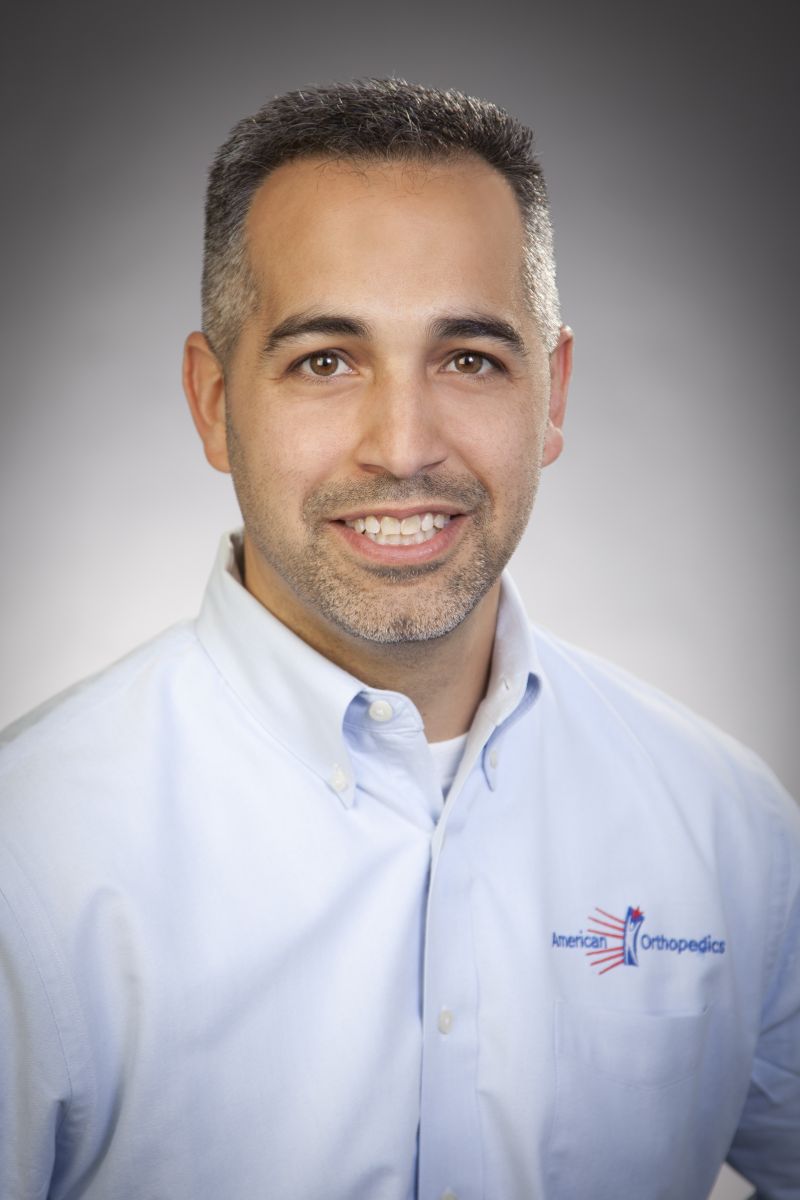 David DeLuccia is an Ohio licensed, American Board Certified prosthetist and orthotist who specializes in lower extremity orthotics, wound care and post-amputation recovery. He earned his Bachelor of Science Degree in Physical Education from Manhattan College. After completing his residency, he earned his Certificate in Orthotics from the Newington Certificate Program before joining the professional staff at American Orthopedics in 2002.

David has been a gubernatorial appointee as well as past President of the State of Ohio Orthotic, Prosthetic and Pedorthic Licensure board. He has been a frequent lecturer for various healthcare professionals, including the Orthopedic Foot and Ankle Society, Physical Medicine & Rehabilitation resident physicians and physical therapists at all major hospitals in Columbus.

In his free time David enjoys spending time with his wife Brandy, two sons and German Shepherd, Nina. His interests include winemaking, woodworking and golf, as well as watching his boys play hockey, baseball and lacrosse. 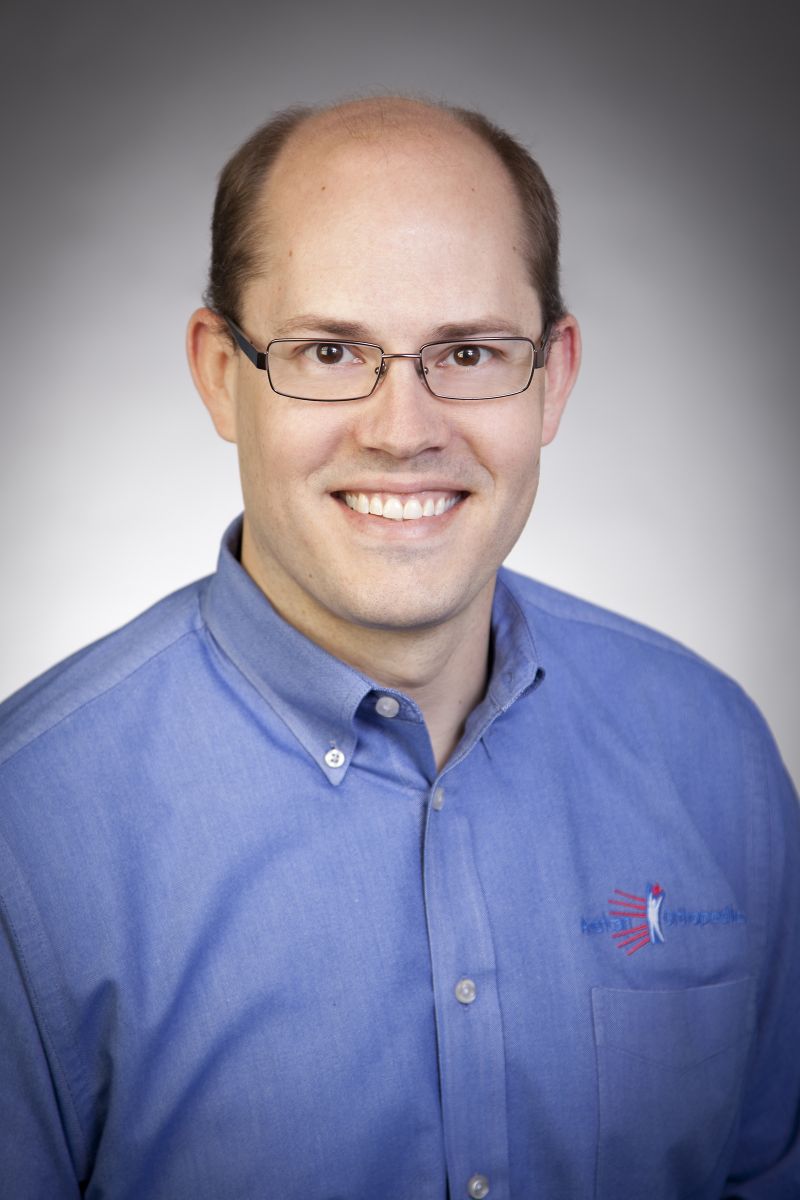 After receiving a Bachelor of Science Degree in Biology from Oregon State University in 1998, Brian joined the professional staff at American Orthopedics in Columbus, Ohio. He received his Certificate of Prosthetics from Northwestern University and his Certificate of Orthotics from Newington College. Brian is an active member of the American Academy of Orthotists and Prosthetists, as well as its Ohio Chapter. He is a member of the Advisory Council of Orthotics and Prosthetics for the State of Ohio and is currently serving on the Board as its Chairman.

Brian is a frequent lecturer to various healthcare professionals, including Physical Medicine & Rehabilitation resident physicians, Physical Therapy Masters Degree students at The Ohio State University Medical Center, as well as to local physical therapy groups. He serves as a consultant to the Orthotic and Prosthetic clinic at Ohio State. Brian serves as an Independent Medical Examiner for prosthetic patients for the Ohio Bureau of Workers Compensation.

In addition to his busy work schedule, Brian is constantly on the go keeping up with his wife and 3 children. His interests include computers, technology, fishing, and beekeeping. 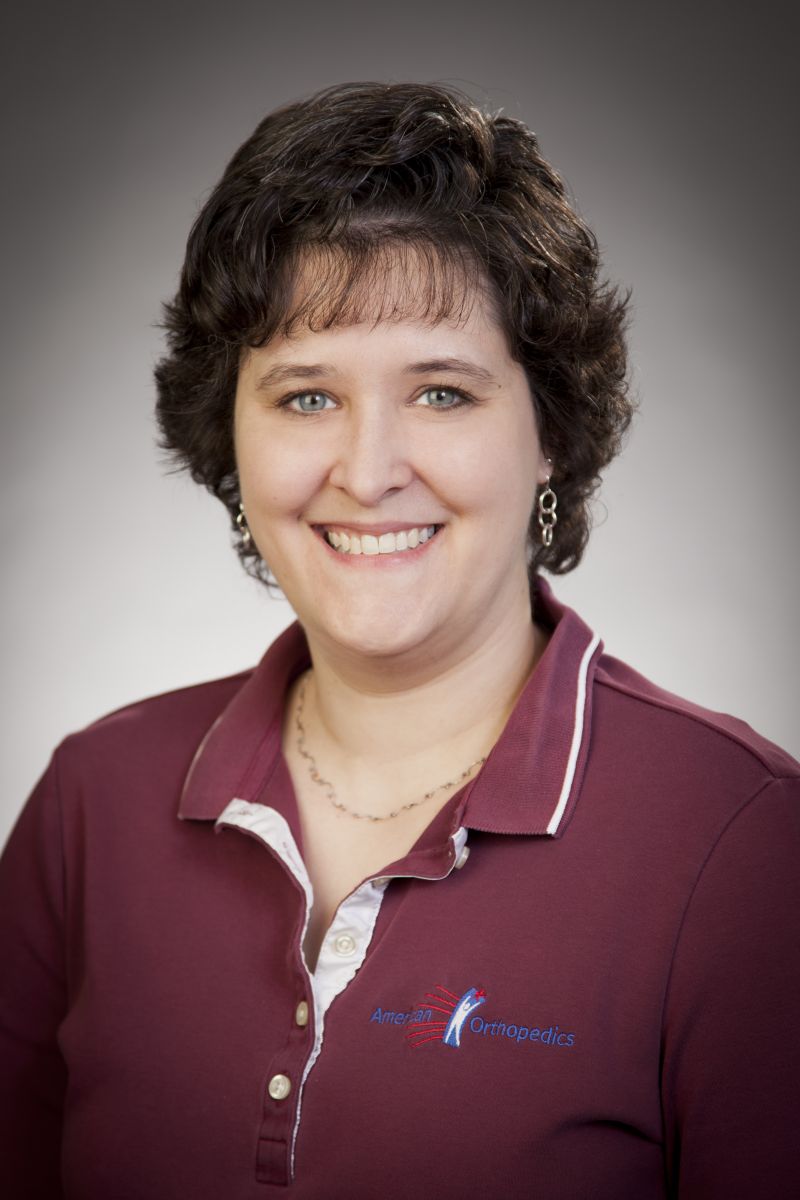 Jennifer Anderson is a true Buckeye, born right here at OSU Hospital. The youngest of three, she also lived in Shreveport, Louisiana and Greenfield, Ohio before coming back to Columbus to earn her Bachelor of Science Degree in Electrical Engineering and Master of Science in Biomedical Engineering at the Ohio State University. She participated in Northwestern University’s inaugural blended-learning program for Orthotics. Today she is an Ohio licensed, American Board Certified orthotist, serving American Orthopedics’ patients with care and expertise since 2004.

In her free time, Jennifer enjoys oil painting, all types of arts and crafts, and weekly Tuesday Night Movie Nights. She is also an avid reader and loves to travel, having been to 49 of the 50 states. Her favorite season is fall because it is Ohio State Football season! 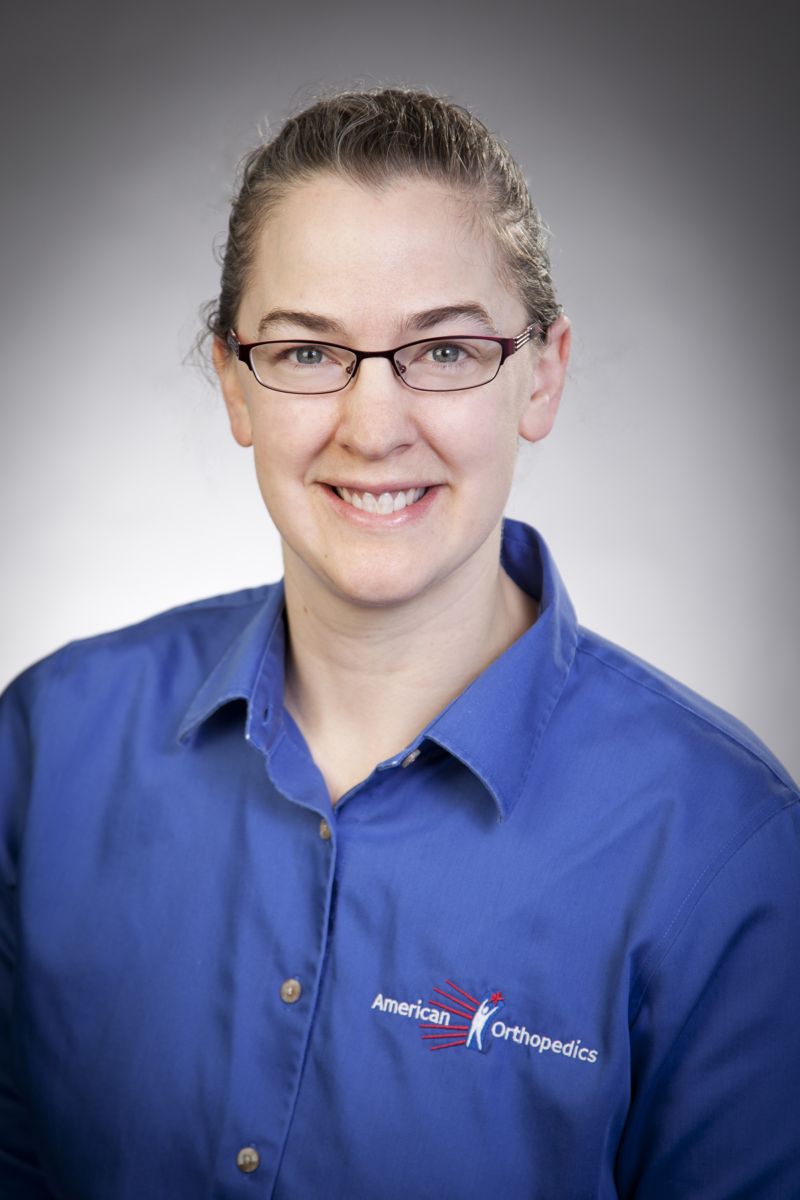 Kristin Bigham was born and raised in Westerville, Ohio. She is an Ohio licensed, American Board-Certified prosthetist and orthotist who came to American Orthopedics in 2005 after earning her Bachelor of Science Degree in Biomedical Engineering from Case Western Reserve University and Master of Science Degree in Orthotics and Prosthetics from the Georgia Institute of Technology.

Kristin met her husband Brian when they were in 4-H together at 10 years of age. Along with their four young children, they live on a farm and raise natural beef and pork. They share the farm with a horse, chickens, cats, peacocks, and two potbelly pigs named Pig Pig and Street Pig. In her elusive free time, Kristin enjoys searching for fossils, digging in sandboxes, coloring pictures, and the occasional dance party. 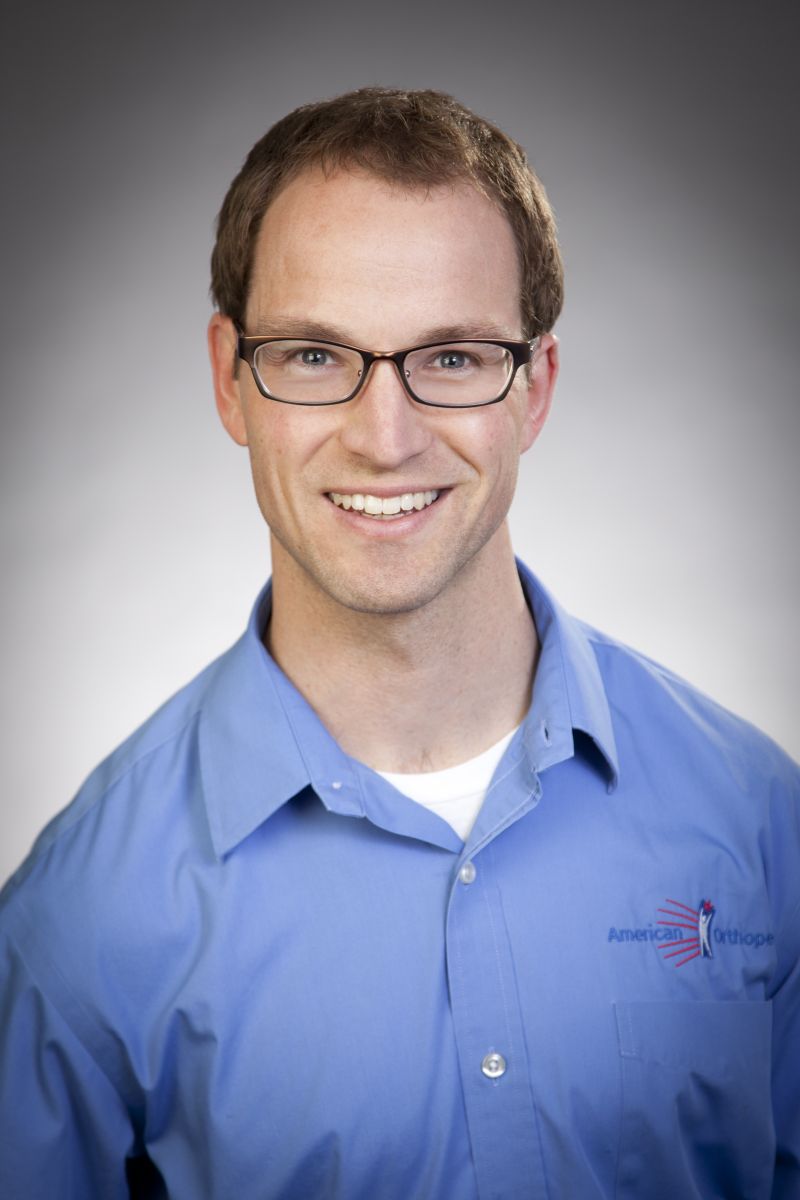 Mike Hansen was born and raised in NE Ohio near Canton. He earned a Bachelor of Science in Mechanical Engineering degree from the University of Cincinnati, and later a Master of Science in Prosthetics and Orthotics from Georgia Tech. He moved to Columbus and has been part of American Orthopedics’ professional staff as an Ohio licensed, American Board Certified Orthotist/Prosthetist since 2007. He has served on the board for the Ohio chapter of the American Academy of Orthotists and Prosthetists. Mike ran cross country and track while in college and credits that experience as part of his inspiration for pursuing a career in prosthetics and orthotics, wanting to help people with mobility challenges stay as active as possible.

Today, Mike and his wife Kelly keep busy with five children age 12 and under. Mike enjoys running, brewing beer in his garage, rooting for Cleveland sports teams (especially the Guardians), and watching his kids play sports. He is also very active in the Saint Brendan community. Michael Phillips is an Ohio licensed, American Board-Certified prosthetist and orthotist. He has been with American Orthopedics since 2010. He earned his Bachelor of Science in Education Degree in Exercise Physiology from Bowling Green State University and his Orthotic and Prosthetic Certificates from Northwestern University. He specializes in lower extremity prostheses and orthoses.

Outside of work Michael enjoys spending time with his wife, Kate, and their pets: Dabbie, Mr. Sandwiches, and Lou Diamond Phillips. 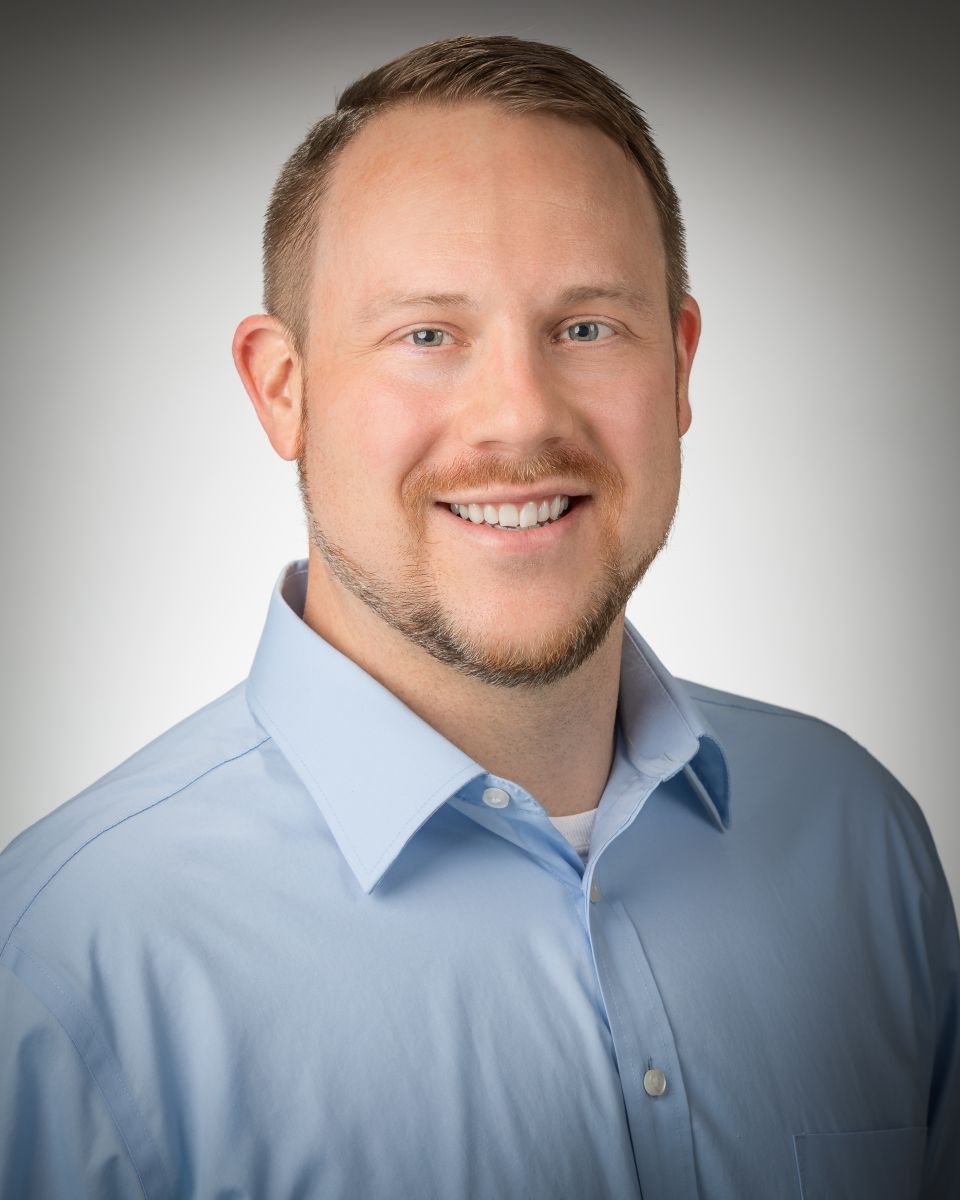 Eric Steinmetz was born and raised in Wilmington, Ohio. He earned a Bachelor of Science degree in Biomedical Engineering from the University of Toledo, and later a Master of Science in Prosthetics and Orthotics from Eastern Michigan University in 2011. He completed his prosthetic and orthotic residency with American Orthopedics from 2011 to 2013 and worked as a licensed prosthetist and orthotist for an additional two years. In 2015 he moved to Lima, Ohio to be closer to his wife’s family.

In 2018 Eric rejoined American Orthopedics and is proud to be back with the company. He serves as the main prosthetist and orthotist at the Lima, Ohio location and also sees patients at the Marion, Ohio office one day a week.

When Eric’s not doing the job he loves, he enjoys spending time with his wife and three kiddos. As a family they enjoy camping, watching Buckeye football, and traveling. In the event there are enough hours in the day between work, family time, and the honey-do list, he likes fishing, hunting, golf, and woodworking.

The Rest of the Team

American Orthopedics has expert team members in Columbus, Lima, Marion, and Springfield--from the front desk intake coordinators to the expert insurance specialists who can help you navigate the wonderful world of insurance to the expert craftsmen in our lab who design and build each custom piece.

Our entire team is ready to serve you with outstanding care and service every step of the way!