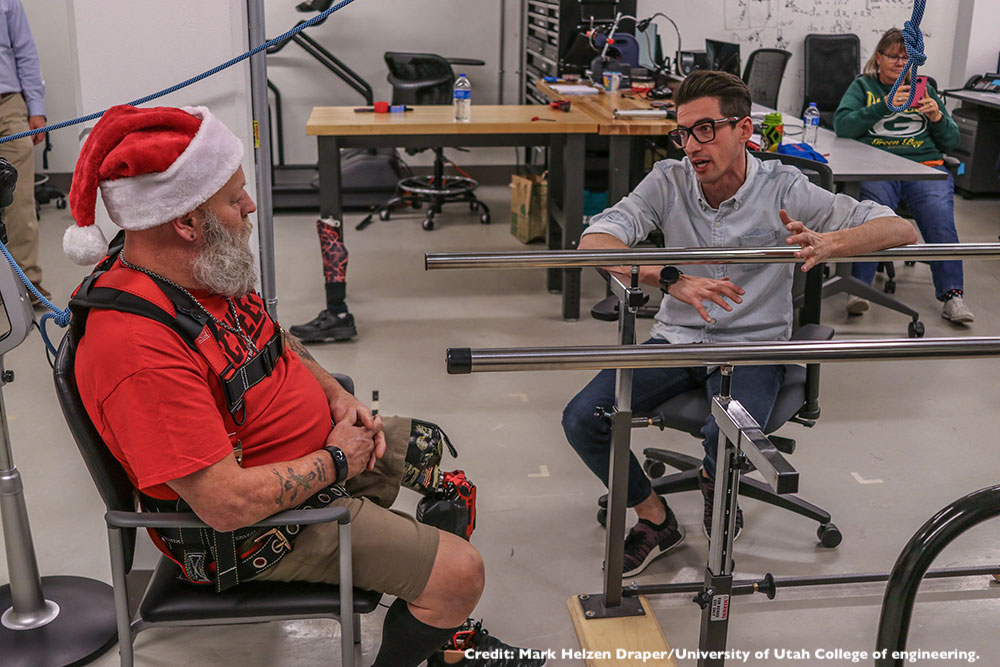 A vascular disease due to type 2 diabetes claimed the left leg of 60-year-old Kerry Finn, a retired truck driver from Salt Lake County, Utah. For a long time, Finn had been using a standard prosthetic until last year when he became one of 10 human subjects that would go on to trial the world’s first truly bionic leg.

“If you’ve ever seen ‘The Terminator,’ that’s what it was like,” Finn says about the experience of testing the bionic leg over the standard prosthetic he normally uses. “It made me feel like I could do things I could not do before. Every time I made a step, it was an awesome feeling.”

The bionic leg developed by researchers at the University of Utah is completely self-powered and has an integrated computer processor that controls motorized joints in the ankle and knee.

Unlike a standard prosthesis, the Utah Bionic Leg employs an array of sensors, computers, motors, and artificial intelligence — all of which are working in conjunction to mimic the biomechanics of a real leg as closely as possible. As such, the bionic leg offers users more power and causes less stress on the body than a standard prosthesis.

“If you walk faster, it will walk faster for you and give you more energy. Or it adapts automatically to the height of the step. Or it can help you cross over obstacles,” says Tommaso Lenzi, assistant professor of mechanical engineering at the University of Utah and the project lead of “Utah Bionic Leg.” The project recently received two grants to further advance the technology, a $2.2 million award from the National Institute of Health and the other a $600,000 grant from the National Science Foundation.

The bionic leg weighs only 2.7 kg (6 pounds), or about half as much as standard prosthesis. This can be a huge advantage for elderly people like Finn who have lost one of their limbs. The light frame was achieved through a combination of light materials (aluminum and titanium) and clever design that keeps redundancy to a minimum.

“Every time you take a step, it’s powered, and it gives a certain kick. It also gives me the ability to take two steps at a time going up stairs,” Finn says. “With this leg, it’s less strain on my stump. You don’t have to work as hard. And it takes a lot of the stress off the body.”

In the future, the researchers plan on using government grants to further improve their bionic leg design. They would like to improve the prosthetic’s ability to anticipate a user’s movements by tracking muscle activity in the residual limb.

“The ability to walk is essential to your life and being able to pursue whatever you want to do. When just standing up is a pain and when walking means being afraid of falling, you just don’t go on with your life and you are stuck at home,” Lenzi says. “This is about making bionics accessible for all people and not just those who are young and high performing.”