Paralyzed Woman Will Use Exoskeleton To Participate in N.Y. Marathon 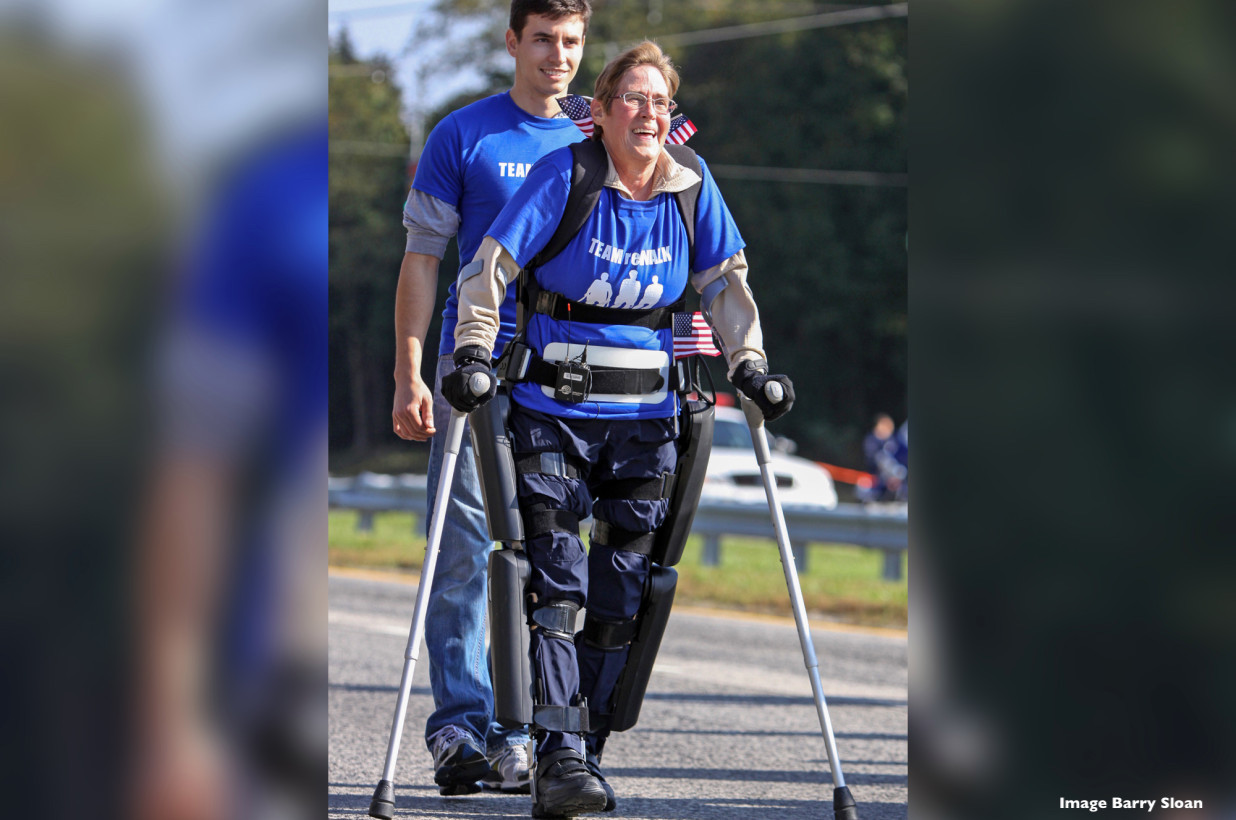 Nearly a decade ago, Terry Vereline — who’s paralyzed from the chest down — “[moped] around in the morning … not wanting to get out of bed.” Now, the Long Islander is prepping for her first New York City Marathon. The 65-year-old ex-Army sergeant (who formerly went by the last name Hannigan) plans to use a ReWalk robotic exoskeleton to walk a reserved course in Central Park — 11 miles on Friday, then 11 miles on Saturday — culminating with a 4.2-mile journey through the finish line on Sunday.

Vereline will be the first to use one of these high-tech walking devices in a US marathon. She anticipates her 26.2-mile trek will take about 26 hours to complete. “The biggest reward would be … setting an example to anyone that’s challenged on any particular level that if you want to do it, you do it the best you can,” Vereline tells The Post.

Vereline suffers from sarcoidosis, a rare inflammatory disease in which abnormal masses engulf the body’s organs. Her diagnosis, received in her late 20s, stems from exposure to chemicals during her time in the military. The nodules first attacked her lungs; after steroid treatments, she was symptom-free for 10 years. But the symptoms returned, targeting her brain and spinal cord. Paralysis set in by 2011.

“I can’t even hold my head up on some days,” says Vereline, who also experiences confusion, fatigue and poor hand coordination from her illness. But “on the days I’m fine, watch out!” Terry Vereline with President Barack Obama in 2013.AP

Vereline has trained for the marathon for more than a year. On good weeks, she alternates between walking 20 miles a day — which can take from 4 a.m. to 8 p.m., including several hourlong breaks to eat and rest — and riding around Middle Island, where she resides, on a hand-pedaled bicycle.

Her mobility is made possible by the exoskeleton device, which is FDA-approved and costs upward of $100,000. Vereline was the first veteran to receive one from the VA, and thanks to her advocacy, every veteran with leg-mobility issues can now receive one through the government.

“It really gave me hope. It really gave me something to look forward to,” she says of the device. Here’s how it works, according to ReWalk Robotics CEO Larry Jasinski: Motors and gears move the body’s joints. A tilt sensor tracks upper-body movement, and sends feedback to the gear that enables the lower body to walk in a heel-to-toe stride. Metal braces, locked in place with hip bands, wrap around each leg to support the walker. Batteries and software are held in a waist pack.

Through her charity organization, the Vereline Foundation, Vereline is hoping to raise $100,000 to help children with disabilities get outside and play. Although she’s not an official marathon runner, her effort is supported by marathon brass.

“Anything we can do to help people accomplish their dreams, we’re proud to do,” says 43-year-old Jim Heim, the marathon’s race director. Vereline, he says, is proof “that no human is limited.” The athlete will have a team of family and friends cheering her on when she crosses the finish line on Sunday. “I’m hoping the man upstairs is watching over me [too],” she says. “He’ll be there!”